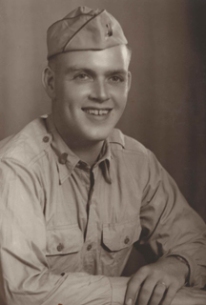 When I was a kid, I could never get Dad to talk about the war.

Over the years I had pieced together some vague details of his war experiences. I knew he slogged through jungles and participated in the Buna Campaign, the bitter struggle to liberate New Guinea from the Japanese. Occasionally we’d watch old war films on the 12-inch black-and-white Admiral television in the living room, and Dad would watch grainy scenes of troops climbing down the webbing on the sides of troop carriers. Sometimes Dad would turn away from the screen and say, “I did that.”

Once I asked Dad how close he had come to getting shot in the war. He said, “Well, I once found a bullet hole in one of the leaves I had stuck in my helmet.” I was thrilled.

I was the oldest of five children of Elmore Jenks and Mary Emerson, born 13 months after the end of World War II. The war was still a pervasive topic of conversation when I was little, and I was often under the impression it had never stopped. Once an educator from Japan — his name was Tatsuo Katyama — visited our elementary school, and the teacher had to assure us the war was over and this very nice young man had come in peace.

Growing up in the aftermath of the war, I was enamored by its glories and the glamour of millions of citizen soldiers who risked their lives to save the world from sadistic fascists and fanatic militarists. In the decades following VJ Day, the most popular films at The Morris Theater featured John Wayne (wearing the uniforms he never wore in real life) fighting fierce but oddly bloodless battles to win the war anew. To us Baby Boomers, the war looked like an experience no one should have missed.

It took me years to realize Hollywood sanitized the war. There were no pictures of dismembered human beings, no soundtracks of the moaning of dying soldiers, no scenes of freckle-faced GIs plying gold from the teeth of enemy corpses.

Also missing were the portraits of incompetent generals and feckless officers. Dad thought his highest-ranking commanders — General MacArthur and General Eichelberger — qualified on both counts. On screen, generals were shrewd and virtuous, and soldiers were virtuous good guys who, when they died in battle, emitted small trickles of fake blood at the corners of their mouths. And when the boyish GIs were off duty, they never went out to get drunk or laid. They went to mixers at the USO club and said, “Golly,” when they were served Cokes by Bette Davis or Carol Lombard. 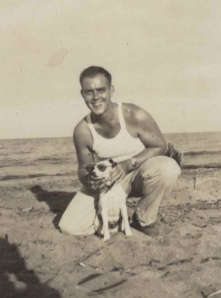 This was one of my favorite pictures of Dad in New Guinea. When I asked him for details, his answer was always the same: “Oh, just some dog that hung around.”

The real war was not so tidy, and it was the real war Dad didn’t talk about. Talking about the mutilated bodies and criminally inept senior officers forced him to think about the real war’s dark side. Looking back, I realize that two of the tactics Dad employed to dim the memories were not talking about them and a tall nightly glass of Mount Vernon Whiskey (also, coincidentally,  the name of the ship that took him to war.)

Dad didn’t talk about any of it, but he put the details in his diary.  I remembered seeing the diary once. It was a small, zippered, canvas-covered book that would fit in a GI breast pocket. He jotted down memories in pencil or fountain pen. I don’t know what happened to the original diary, but I’m sure it’s in a box somewhere, in Florida or New York or, perhaps, in Pennsylvania.

Fortunately, toward the end of the war when Dad had some free time, he decided to make a typewritten copy of the diary. I found the typed version curled amid the pages of Dad’s military records — his 201 file — that had been entrusted to me for safe keeping after Mom died in 1983.

I found the diary to be a remarkably detailed record of a combat lieutenant’s experiences in the Pacific Theater. It includes scenes of relentless boredom in camp, drunken efforts to relieve the ennui, and occasional confrontations with senior officers. The diary also includes disturbingly detailed descriptions of jungle battles in New Guinea.

The diary is not a comprehensive record, of course. It seems to leave out many details. Except for his frequent complaints of fever and stomach aches (probably due to malaria) or his admissions of sadness and homesickness, Dad rarely recorded his feelings, his gut reactions to the things he was experiencing.

When I began to edit the diary, I tried to place entries in a chronological sequence, if I could figure it out. I have also eliminated some duplication; for some reason, Dad typed out two lengthy versions of his initial arrival in Australia. I’ve also tried to spell out military abbreviations when I knew them, and I’ve done some minor editing to make the diary easier to read. Beyond that, the words and memories are Dad’s own.

Elmore Jenks died April 16, 1999. Before his death, I interviewed him on one or two occasions about his war experiences. We made plans, but never got around to doing it, to go through his 201 file page by page so Dad could provide additional details as he recalled them. My thought was to expand this edited diary into a future memoir of one soldier’s participation in one of the great events of the 20th century.

That will never be. But I hope this version of Dad’s war diary will be a useful document for Elmore’s family and friends and even, perhaps, for professional historians. I have found it to be a valuable record of an important time in Dad’s life, and a rare insight into Elmore himself.